In a world where the POTUS and Mega Millions jackpots are larger than life and continually changing, being able to predict the immediate future seems preposterous. So, to be able to foresee how an entire industry and the professionals in it will progress over the next decade may be pointless.

Yet prognosticating about the imminent years ahead for the design and construction industry, may be the single best way to prepare for, experience, and positively influence A/E/C’s future.

Let’s first look at the world that architecture, engineering, and environmental consulting professional will support with their work by the year 2030.

The United States’ diverse population is a globally connected minority population who live online. They shed their heavy laptop computers, tablets, and cell phones as their clothes and accessories link them effortlessly and continuously to the Internet. And the data generated with incessant interaction (that they may or may not be aware of) will lead to intuitive supercomputers with algorithms that learn and anticipate every need and want.

Demographic developments
What can we expect in 2030 when it comes to population, age, and diversity? First, the United Nations Department of Economic and Social Affairs predicts the world population to reach 8.6 billion by 2030—a quick billion people added globally.

Today, India and China hold nearly 40 percent of the total world population. By 2024, India will surpass China as the world’s largest population center. The United Nations also reports the fastest population growth will be in the world’s least developed countries (LDC). The combined population of the LDCs, roughly one billion in 2017, will, by 2030, increase by a third.

The U.S. will mark several milestones of its own by 2030. The U.S. Census Bureau says all baby boomers—accounting for about 20 percent of the population—will be over 65 by the end of the next decade. The aging of baby boomers means older people will outnumber children for the first time in U.S. history, says Jonathan Vespa, a demographer with the bureau. “By 2035, there will be 78.0 million people 65 years and older compared to 76.7 million under the age of 18.”

The U.S. population will also grow at a slower pace and by 2030 the primary driver of population growth in the U.S. will come from outside its borders. For the first time since the nation’s founding, the net number of migrants to the U.S. will exceed the natural increase (domestic births minus deaths).

Experts predict the number of births to be nearly four times larger than the level of net international migration in coming decades, but a rising number of deaths will increasingly offset how much births are able to contribute to population growth. 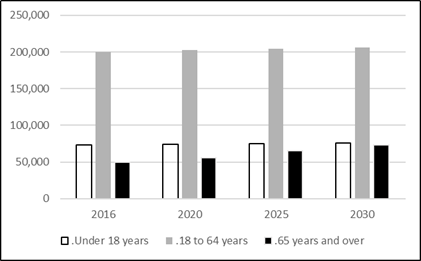 The ongoing shifts in the racial composition of the country will continue and accelerate. Demographer William H. Frey, points out, “America reached an important milestone in 2011. That occurred when, for the first time in the history of the country, more minority babies than white babies were born in a year. Soon, most children will be racial minorities: Hispanics, blacks, Asians, and other nonwhite races.”

In comparison, the population among whites who don’t identify as “non-Hispanic” will grow from about 253 million to 275 million over the same period. The multi-racial population will be the fastest growing over the next several decades, reports the Census Bureau. According to Frey, more than one in every seven marriages in the U.S. involves a multiracial couple.

About the Author: As Founder and CEO of PSMJ Resources, Inc., Frank A. Stasiowski, FAIA is a counselor, strategist, and advisor to CEOs of the top design and construction firms in the U.S. and abroad.  Stasiowski is a licensed architect with degrees from the Rhode Island School of Design and an MBA from Bryant University. He has spent the last 35 years working with design firms.

This article is an excerpt from the just released IMPACT 2030. As clients demand that work be delivered faster, and as the workforce gets younger, and we increasingly rely on emerging technology to balance cost pressures, nowhere are specific changes discussed in terms of how they affect long term strategic decisions for A/E/C principals. IMPACT 2030 outlines how demographics, globalization, government expansion, and technology advances can benefit firms that plan ahead — and be devastating for those that don’t prepare.