Anyone in the A/E/C industry won’t be surprised to hear that it will take more than $4 trillion to fix the aging, ailing U.S. infrastructure.

Decades of neglect and patchwork fixes have taken their toll on bridges, roadways, pipelines, and transportation systems, so much so that the American Society of Civil Engineers recently gave U.S. infrastructure a barely passing grade.

Most of our roads, bridges, public transit, and even our sidewalks were built well over 50 years ago, and have reached the end of their useful lives.

WHERE DO WE STAND? In a recent appearance on Aljazeera’s “The Stream,” Barry LePatner, construction lawyer and author of Too Big to Fall: America’s Failing Infrastructure and the Way Forward, joined Tom Smith, Executive Director, American Society of Civil Engineers, and journalists John Nichols and Tanvi Misra to discuss the problem.

LaPatner is no stranger to the situation. Since the collapse of the I-35w Bridge in Minneapolis in August, 2007, he has tracked the state of things on the website SaveOurBridges.com. LePatner says politicians have failed to address the problems, so he started the site with a “grass-roots upstart focus.” LaPatner estimates roughly 60,000 structures are “fracture critical,” and should be avoided because they could collapse any moment. Lacking redundancy or any federal commitment to add structural integrity, sooner or later they will fall altogether. And that will have effects that ripple through society.

SO WHY IS OUR INFRASTRUCTURE A MESS? According to journalist John Nickels, the U.S. historically spent a lot of money on programs that weren’t identified as “infrastructure.” For example, in the 1930s with the Works Progress Administration and Civilian Conversation Corps, building roads, dams, and pipelines was viewed as creating jobs. Similarly in the 1950s, the interstate highway program under Eisenhower was politically very popular. But Eisenhower sold it as a national security initiative.

Now there’s a new debate, and it’s not caused just by the desire to create jobs or ensure national security. Rather, it’s the result of years of spending federal monies elsewhere, and there has been neither the political will nor the leadership to address the crumbling infrastructure. LaPatner seconds this notion with statistics. The U.S. investment in building infrastructure is at an all-time low. Currently China spends nine percent of its GDP on building infrastructure. In India, that number is over five percent. In the U.S., it’s less than two percent. And of the money that is spent on improving public works, poorer inner-city communities are often neglected. Not just roads and bridges are at stake, there’s the digital infrastructure as well.

ADDRESS THE PROBLEM NOW! LaPatner says that between now and 2050, the U.S. will have nearly 100 million citizens mostly located in the southern and southwestern regions of the country. He believes this will necessitate creating new urban areas of millions of people (who aren’t even alive yet) and we’ll not only be dealing with failing water pipes that leak 10 million gallons a day, an electric grid which is already operating at its limit, and disintegrating roads, bridges, and dams, we will also have to build anew. We will need more infrastructure to house and move citizens.

Speaking as an engineer, Tom Smith sees an opportunity to do things right, to be pro-active instead of reactive. With 2.5 million jobs at stake by failing to invest in infrastructure, Smith believes that planning now can provide a solution to much of what’s ailing. But it must be done in a sustainable, socially responsible way. Nickels stresses that it’s important that the federal government remains involved. That doesn’t mean that private sector won’t be involved, but national priorities do matter, and government needs to remain highly engaged with a real role. 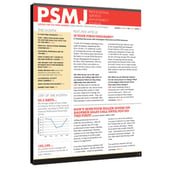 This article is featured in PSMJ's October 2017 newsletter, Professional Services Management Journal (PSMJ). In today’s fast-moving information overload world, it seems that there is industry-related content everywhere you look, with some nuggets of advice on how you can be more successful. PSMJ’s carefully-curated content ensures that you are not getting generic filler, hypothetical fluff, or anything but proven battle-tested advice. Check out a free copy available at the link below.