The recently released report, A/E Recruiting Study:  How Today’s Most Successful Firms Find and Recruit Talent, presents the results of a study that PSMJ conducted on architecture and engineering firms’ recruiting practices. With 100 participants, this comprehensive report begins with a discussion of what we learned about talent acquisition needs in today’s A/E firms, followed by what we learned about the wide variety of ways that firms find and recruit talent and how effective they are. We also compared this year’s results with those from a similar recruiting trend study done in 2013.

In this study, we also asked a range of questions relating to how firms most frequently find and recruit talent, and then overlayed that data against what recruiting practices respondents believe are the most effective. Again, we compared this year’s results with those from a similar recruiting study done in 2013.

For instance, regular use of social media to find and recruit design/technical professionals has increased dramatically. Since 2013, regular use of LinkedIn, Twitter, etc. has more than doubled, increasing from nearly 18 percent to 39 percent this year. Not surprisingly, only six percent of firms reported that they never use social media for their recruitment efforts. 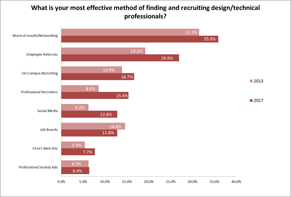 Moreover, in both 2017 (32 percent) and 2013 (36 percent), the majority of participants reported word of mouth/networking as their most effective recruiting method. This was followed by employee referrals in both 2017 (19 percent) and 2013 (27 percent). Interestingly, percentages for all the recruiting methods increased from 2013 to 2017, with the exception of job boards (see chart left).

And finally, we have wrapped up this comprehensive study with specific conclusions based on how the most successful firms find and recruit talent. Our goal is to provide new insight into best practices for A/E firm recruiting.

Though we only cover a small corner of the vast world of A/E firm recruiting in this study, we do hope you find it helpful. PSMJ's A/E Recruiting Study: How Today’s Most Successful Firms Find and Recruit Talent is available as a free download for PSMJ newsletter subscribers.